Spiders lay eggs. Depending on species, they can lay thousands of eggs or just one single egg as is the case with the tiny spiders in the genus Monoblemma (found in tropical Africa and tropical Americas). The featured image above shows the egg sac of Argiope aurantia (AKA banana spider, garden spider, Steelers spider) on the left and a wolf spider (Rabidosa punctulata) egg sac on the right.

Magnified photo of spider eggs inside a sac.

The female spider produces a mat of silk, the eggs are deposited on the mat, and the whole thing is wrapped up to look like a sac. Some sacs are paper discs. Some look like fluffy balls, some look like debris, and some are merely held together by a few threads. Egg sacs may be abandoned or protected while the eggs are developing. Wolf spiders and fishing spiders carry the egg sac around with them. Some spiders make a silken tent and hole up with the eggs until they hatch. Spiders can produce several eggs sacs per season. Spider egg sacs are nearly as diverse as the spiders themselves!

While hiking at McConnell’s Mill State Park, I came across “cave spiders” that I never saw before. The cave was between some big boulders with camel crickets all over the place as well. Perhaps camel crickets were the main menu item for these spiders. I took a bunch of pictures and was later able to identify the spiders as Meta ovalis, the cave orbweaver, using an egg sac as confirmation.

Some spider egg sacs that you may already be familiar with are woven by our common house spiders. Teardrop-shaped, papery, brown sacs, about the size of a pinky nail, belong to Parasteatoda tepidariorum. These spiders are common in porch corners and garages. Then there’s my roomies, Steatoda triangulosa AKA The Vacuum Evaders which create perfect, cottony spheres. 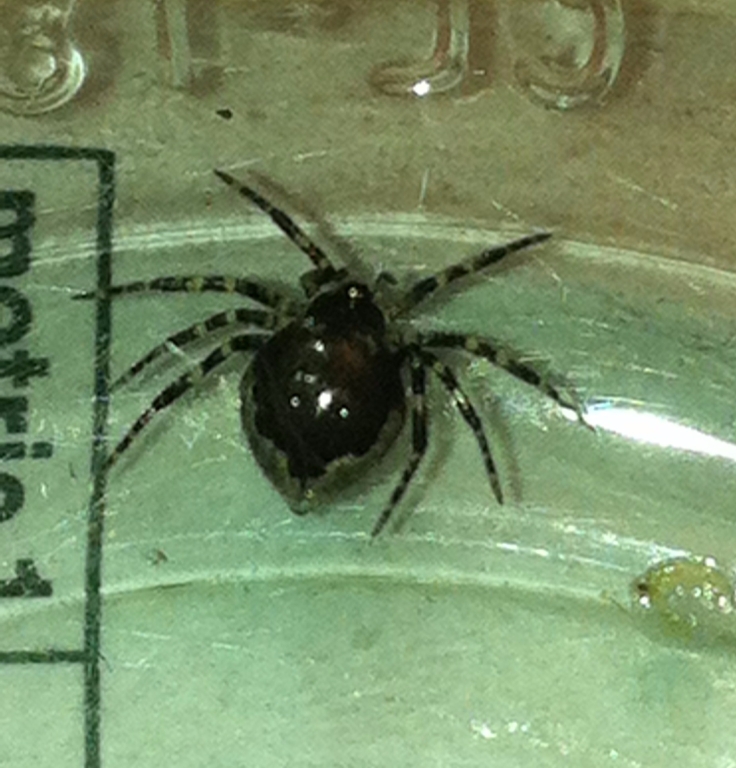 Spiders are dioecious which means there are male and female. Check out The Birds and the Boxing Gloves? for more info on how to tell them apart. Even though there are male and female, there have been cases of female spiders giving birth to all female spiders, no males needed (parthenogenesis). Spiders may also lay a bunch off infertile eggs that just never hatch. This has happened with my captive immature female spiders who have been isolated from males. Suddenly, an egg sac appears. I’ve opened these egg sacs just to find the eggs hard and clumped together like a stone.

Once the spiderlings hatch, they stay inside the safety of the egg sac for their first molt and then bite their way through the silky mesh. Wolf spider mom’s tear open the sac for the spiderlings and they quickly climb onto her back. As of this writing, I have the large, yellow egg sac of the orb weaver Neoscona crucifera. The spiderlings have hatched, but are still in the sac. I can see them moving around when I put a light underneath the container. It’s a cold January here in Pittsburgh, most all spiderlings would naturally come out in spring. Since they’re in the heated indoors, I’m guessing they’ll come out sooner. We’ll cross that bridge when we get there!

I have just touched briefly on the diversity of spider egg sacs. There are many more like the vase-shaped bolas spider sac and the brown widow’s spiked sphere which resembles the ball on the end of a flail. Brown recluse egg sacs stand out under black light and the pirate spider’s sac is bright orange. It’s like gift wrapped spiders!

Check out this video of a  black widow laying eggs

And just for fun, here’s a link for spider egg donuts

12 thoughts on “The Egg Sac Gallery”