Spiders have eight legs and two palps. They are used to handle prey kinda like little arms. The palps are also important in reproduction and identification. If you see a spider with swollen palps that look like boxing gloves, it’s a male. If they are smooth it’s a female or an immature male who hasn’t come of “age”. Here are some photos of obvious male spiders: 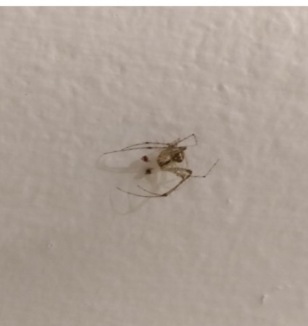 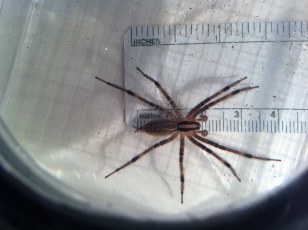 In addition to “boxing gloves”, male spiders are usually smaller than females (some orb web weaver males are insanely tiny in comparison to their female counterparts) and can be more colorful almost to the point of looking like an entirely different species. Male spiders can also sport a head stalk, crazy head bristles, leg tufts, eyebrows, and extra large chelicerae (the spider’s “jaws”) depending on species.

Spiders have an interesting way of mating. A spider’s reproductive organs are located in the abdomen. Access is through a slit on the underside of the abdomen called the epigastric furrow. The male spider transfers sperm into the female with its palps, but first, it must collect sperm from its genital opening because the palps are merely the vehicle, not the source. Male spiders spin a small mat of silk (sperm web) and then rub their abdomens on it, releasing sperm. They then dip their palps, take in the sperm, and off they go on their mission. Each species of spider has its own genital design. The parts of the palp have to fit into the female like a puzzle piece which is why spider reproductive organs are examined for species ID. The picture below is a magnified example of how complicated a palp can be. Combining that system with female preference during courtship leaves little chance of cross breeding in spiders.  So, no, there will never be a widow/recluse hybrid nor a queen, killer, mama spider like in the movie Arachnophobia.

The opening to the female spider’s internal genitalia is called the epigynum also located on the underside of the abdomen. This is where the male needs to insert its palps, usually one at a time. The epigynum is also used for spider ID to the species level.

You may be thinking about the black widow spider and her unfortunate male suitor. In the spider world, the male has ONE mission – to reproduce. They die shortly after mating so being a meal is a fairly efficient donation of energy to the female who is left with the task of “raising the kids”. However, male spiders are usually not eaten and are able to move on to the next female while he has some life left. With that said, the male spider uses pheromone-induced courtship behavior which can range from subtle vibrations on the female’s web and leg tapping to flamboyant dancing as seen in the peacock spider. Other interesting courtship behavior involves the male bringing a food gift to the female (Nursery web spiders) and the male lightly binding the female in silk prior to mating (some crab spiders). Here is a video of Phiddipus audax (Bold Jumping Spider) trying to make the moves on a much larger female. Although the female noticed the male, she eventually wandered away uninterested. The male did not pursue and also went his own way. There isn’t much in the way of spider romance, although I did observe the same spiders mating on several occasions over a period of a few days.

I caught a male and female hammock spider (Pityohyphantes costatus) on a hike in the Seldom Seen Greenway (Beechview, PA) back in mid March of 2015. They were both under the loose bark of a dead black cherry tree. The mature male (6mm) was larger than the female (5mm) so I figured the female may be immature since she was smaller. I’ve read that males spiders will hang out near an immature female as they wait for her final molt into sexual maturity. Spiders molt like snakes do leaving behind a “shell” that looks just like the spider, color, hairs, and all. Both male and female spiders go through several instars before reaching adulthood. To be safe and not have anyone eat each other, I housed the spiders into separate containers. The female molted within the week. I introduced the male into the female spider’s container and it didn’t take long. Both approached each other directly. The male did some leg tapping and abdomen bounces during the approach then positioned his long front legs beneath hers so they were face to face. The female ended up slightly on top of the male so his palps were where they needed to be. After about 15 minutes of watching the the two spiders basically sitting still while the male alternated palps, I got bored and wandered off checking back every now and then. After an HOUR AND A HALF, they separated and the male climbed around, hanging out. The female did not make any move to eat him. Later in the evening, I checked on them and THEY WERE DOING IT AGAIN! The next day, they were just hanging, the day after THAT, they were mating. Two days after that, mating again. And again the next day. I began imagining how cool it will be to observe the entire life cycle of the hammock spider; how long before the eggs would be laid, how long before they hatched, maybe organize a baby shower and ask guests to bring fruit flies (kidding). Well, 2 weeks later, the female died. I don’t know why and I don’t know how. The male spider could’ve been the culprit although there was a moth and a lady bug crawling around in there. Maybe hammock spiders don’t like moths and lady bugs. Maybe I should’ve separated them immediately after they mated. In nature, they wouldn’t be confined to a container. It turned out to be more of a mystery story than a romance story…

That, my friends, is the bare-bones basics of the birds and the boxing gloves. There is a wealth of more detailed info on spider reproduction via scientific journals and the internet if you want to know more. There is a whole chapter in Foelix’s Biology of Spiders that goes into very great detail. For most people, just knowing that boxing gloves=male is good enough, BUT next time you see two (or more) spiders in a web, you’ll know what’s up! (cue up chick-a-wow music here).

4 thoughts on “The Birds and the Boxing Gloves?”