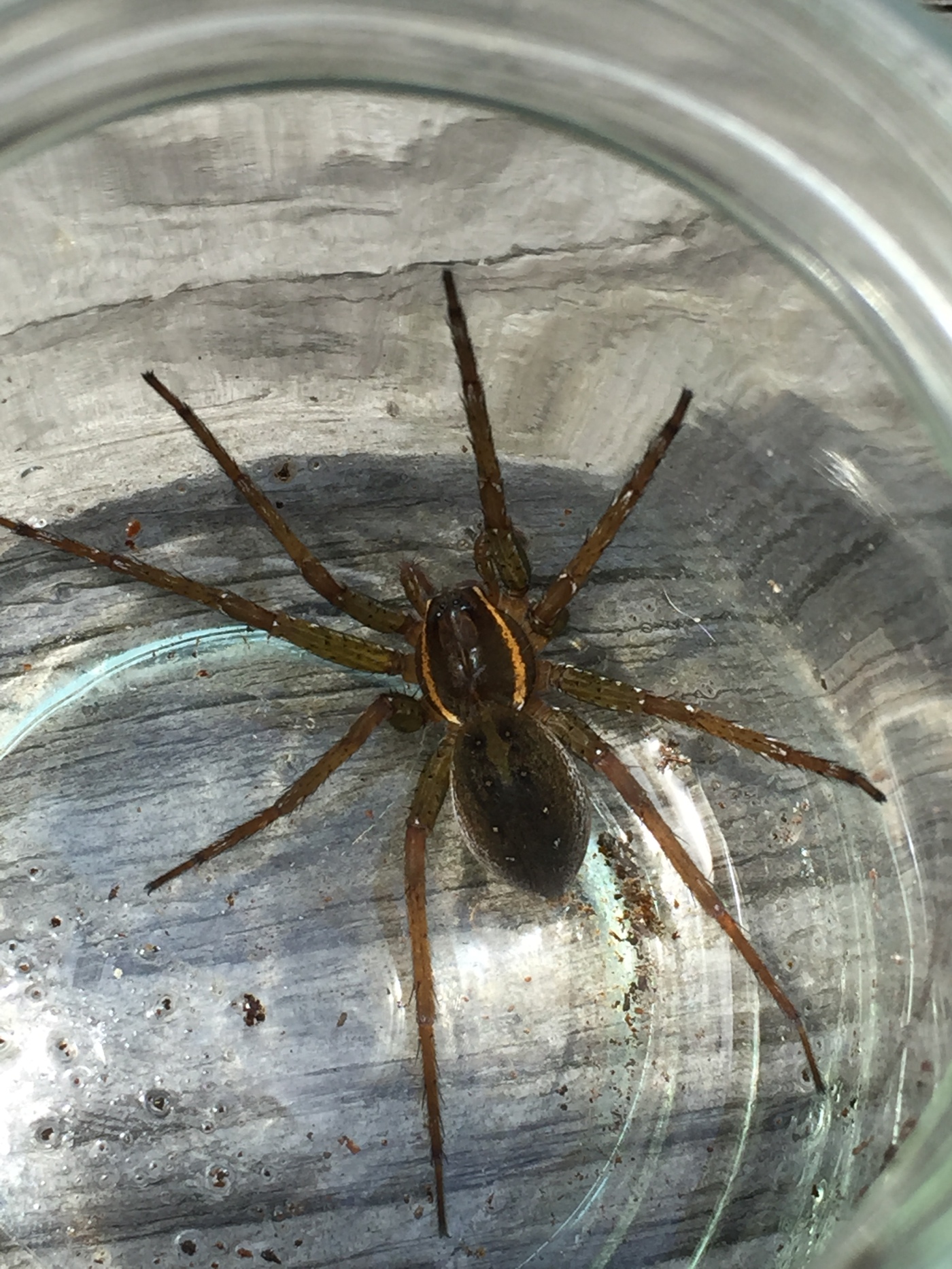 Here’s a story about dedication and the six-spotted fishing spider, Dolomedes triton. Dolomedes is one of three genera in the Pisauridae family (Fishing spiders, Nursery Web spiders). This family (14 species) boasts some HUGE specimens with leg spans that could fit to the edge of a drink coaster. Rivaling wolf spiders in size and beefiness, the two are often confused. Wolf spiders are a whole different family, Lycosidae. There are a few easy ways to tell if what you’re seeing is a wolf or a fishing/nursery web spider. If you are comfortable and able to get up close (chances are the spider will ghost at the slightest hover of shadow) check out it’s eyes. Both families have 8 eyes. Wolf spiders have much larger posterior median eyes that look like two black headlights shining back at you on rounded army helmet shaped heads. Fishing/nursery web spiders have smaller eyes and more of a flattened, Brodie style army helmet shaped head. Another easy way to tell the difference between the two is if you see a spider running along with an egg sac attached to its butt, it’s probably a wolf (and then the spiderlings climb on mom’s back, so there’s that, too). If the spider is carrying an egg sac in its jaws, it’s probably a fishing spider. Cellar spiders and spitting spiders do this as well, but you’d never get them confused for a fishing spider. The former are way too skinny.

Since members of the Fishing/Nursery web family tend to be so big, they’re easy to spot if they’re on a contrasting background. Otherwise, they are camouflage masters.

These types of spiders are common around Western, PA and although I’ve run into my share of Dolomedes tenebrosus, which are pretty impressive in of themselves, I’ve never seen Dolomedes triton in real life. Until family vacation at Lake Milton, Ohio. The nephews and I were leisurely biking around the lake. At the lake’s edge, I noticed movement. A large spider (body about 15 mm and leg span around two and a half inches) ran across the water into a stand of cattails. And then disappeared. I got off of my bike to investigate and actually found it! The spider had stopped and was holding on to a cattail stem about 6 inches under the water. I knew it was triton because they like to be near the water, it had two bold, white stripes along the edge of it’s head, and it had the  six white spots on it’s abdomen which gives it its common name, the six-spotted fishing spider. I never knew they could dive. How awesome! (Not to be confused with the Diving Bell Spider. Unfortunately, we don’t have Diving Bell spiders in North America. Bucket list.)

I decided, I was going to catch her. By this time, the nephews were involved in the best way to go about this without actually getting in the water. The spider was in its element and I expected it to disappear deeper into the plants at the first hint of vibration. With one leg bracing the footbridge and another on the edge of a rock, I precariously leaned over the water with a stick. I didn’t have a plan, like, what was I going to do with a stick? Surprisingly, the spider didn’t make any super fast moves, it only shifted a short distance while staying in sight. After 10 minutes of gentle coaxing, the spider climbed out of the water and onto a dead cattail leaf which I then simply pulled out. She (no boxing gloves) had flattened herself against the leaf in a “no one can see me” posture so I figured she’d stay put and we’d ride our bikes back to the house with this spider chilling on a cattail leaf. Yay!

Nah, that didn’t happen. I really gotta hand it to my nephews for being so patient. Twice along the way, the spider leaped, legs fanned out, off of the leaf . She floated like a parachute to the ground both times, but then hit the ground running. Both times, my nephews and I leaped off our bikes and surrounded her so she couldn’t run off into the weeds. I kept trying to get her to go on the leaf, but that was obviously not working out. Picking her up was not an option for two reasons. I might squish her and she might bite me. They’re harmless, but she was big enough that I didn’t wanna know what that would feel like. “What can we put her in?” I asked, looking around. A Gatorade bottle, anything? I have to say, the park around the lake is very litter free. That’s great, but, behold, in the distance! A TRASH CAN! I managed to get Dolomedes triton to rest on a stick as we pulled the top off of a public trash can and started digging. I’m tellin’ you, I have the best nephews. And they sure have a lot of stories. Eventually, I tricked the spider into going into a water bottle we found and we were finally able to bike back to the house without anymore paratrooper attempts.

Back at the house, I rehoused her into a larger container, took a snapshot or two, and jotted down some notes. I later released her where I found her. She was just so majestic and beautiful I didn’t have the heart to keep her and remove her from a habitat I could never recreate at home. Since I have only one good pic (the featured image) here are a collection images and a ton of info about Dolomedes triton on Bugguide.net.

I hope she went on to have many spiderlings!