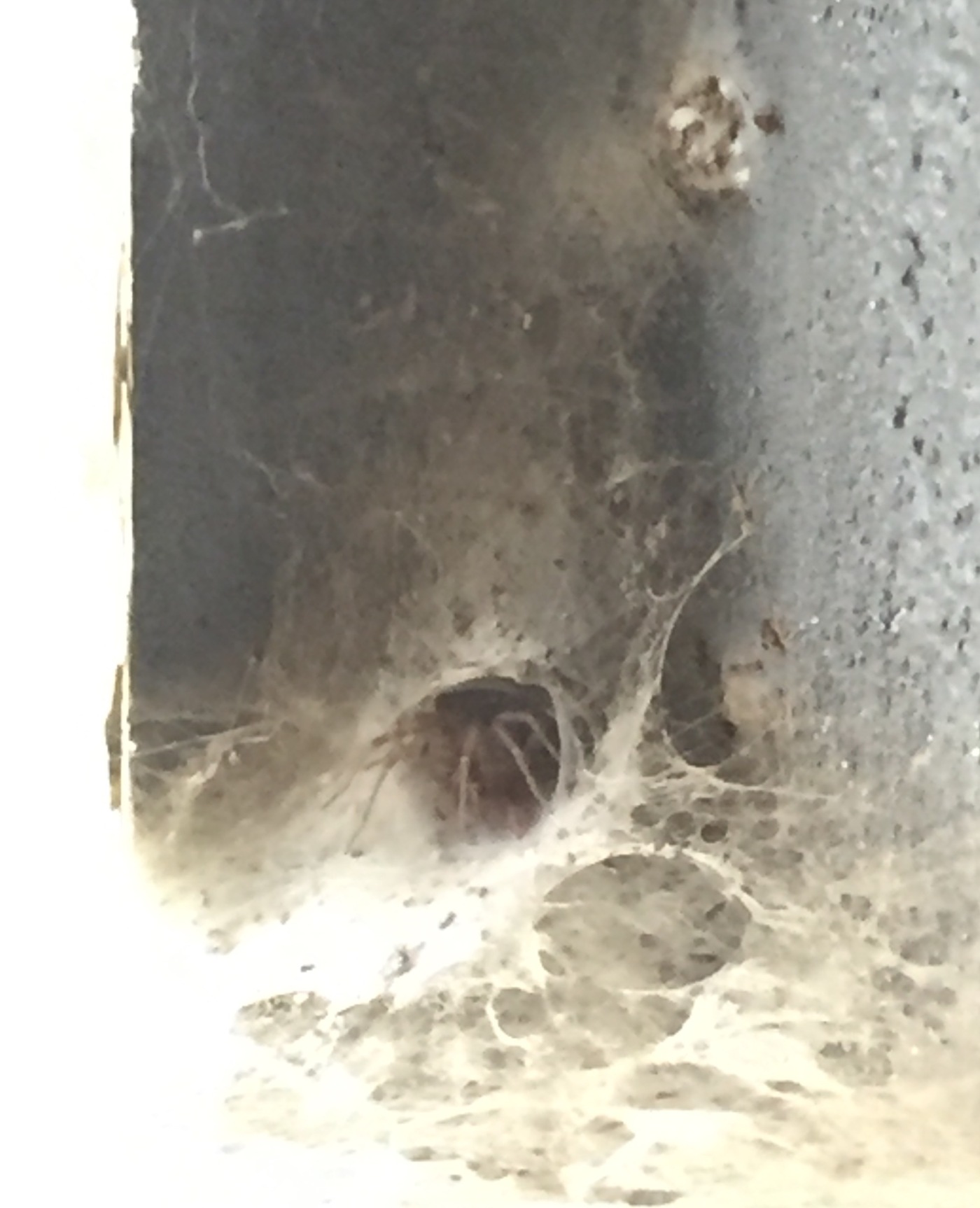 Have you ever seen a fairly flat, mat-like web that spreads out from a funnel with a spider sitting at the opening of the funnel? I’ve heard kids call it a “cyclone web”, which is a cool description. The web is actually a funnel web and the spider in it is called a funnel web weaver, funnel web spider, or grass spider. Common names are easier to remember than seemingly unpronounceable scientific names, but it many cases, it’s necessary to distinguish whether someone is talking about a funnel web spider (family Agelenidae  – pronounced age-a-LEN-i-dee) and a Sydney funnel web spider (Atrax robustus – fairly easy to pronounce). The two are completely different. I don’t know a lot about Sydney funnel web spiders, but I know they’re not found around here (they live in Australia), they’re thick, heavy spiders, and their venom is quite toxic to humans. No need to panic! Our American funnel weavers are harmless. Funnel weavers are common in corners of basements, grassy fields, shrubs, and cozy crooks of tree roots. 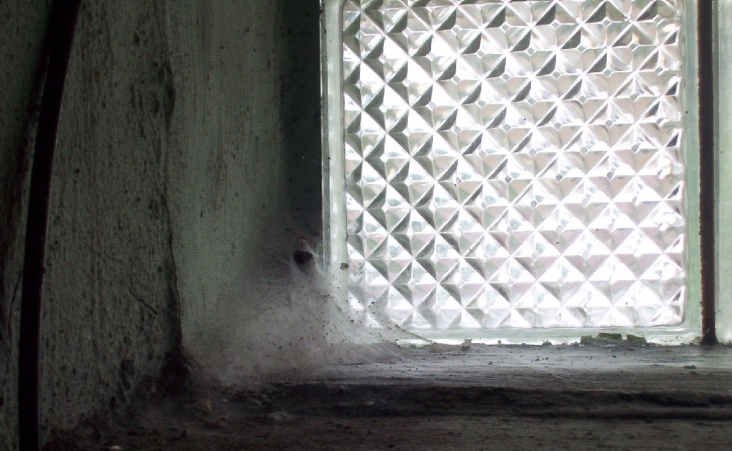 There are 111 different kinds of funnel weavers North of Mexico. I have stories about two. One is a common house squatter. If I ever need a funnel weaver specimen for a spider presentation, I can usually locate one in the basement in less than a minute. Catching it is another story. Funnel weavers are FAST and they have a backdoor escape route if something large and scary is messing around at their front door. What’s interesting about their webs is that they are not sticky. I used to spend a good amount of time as a child throwing ants into funnel webs and watching the ants just scurry off before the spider even got to them. I thought ants had special super powers that resisted spider web glue. They don’t. There just isn’t any spider “glue” in the silk. The web simply trips up bugs so the spider has a chance to jet out and grab it. Funnel weavers are fast and aggressive when it comes to capturing prey, super cool to watch!

Years ago, in early November, I was helping clean out a friend’s basement. A small (4mm head to end of abdomen), fast spider ran across the floor. I caught it to see if I could ID it. I noted that it had dark markings running horizontally across it’s abdomen and no bands or rings on the legs. It had hints of two darker stripes that ran from the front to the back of the head, and two noticeable spinnerets, not long, but noticeable. Spinnerets are finger-like appendages on the end of the abdomen. This is where silk is produced. After a few days, I noticed the spider had built a funnel web in its container. This was a dead giveaway for me that the spider was in the Agelenidae family. I fed it springtails that I would find outside in the leaf litter. The spider would sprint out of its funnel, grab the springtail and run back in. I had this spider for a long time and referred to it as Wayne’s Spider (because it was in Wayne’s basement). My notes say it was a good eater which means it accepted everything I tossed in its web; flies, crickets, and random beetles. I also noted how ferocious it could be with prey, attacking immediately with a bite.

Months passed and the spider grew and molted. I moved it into a larger enclosure. During those months, this spider was hardy and consistent while I was dealing with the ebb and flow of the rest of my spider collection. Wayne’s Spider molted again in April into a mature, male funnel weaver…and then stopped eating. I’ve read that once male funnel weaver spiders reach maturity, they abandon their web and become wanderers in search of females. My notes from June of that year:

The ferocious Wayne funnel weaver hasn’t eaten in a very long time and it’s often skittish. Before, during a disturbance, it would simply sit still inside the funnel. I sprayed some water in the container today and the spider nearly ran out! He has beautiful reddish brown legs with a span larger than a quarter, a beige abdomen with chevrons, an overall fuzzy look, and a shiny carapace (head).

Wayne’s spider died in early September. I had him for 10 months. I identified it as Tegenaria domestica, but I’m not 100% certain of that ID. I’m sure I can find another in Wayne’s basement to follow up!

The spider in my next story is Agelenopsis pennsylvanica. Yep! We have a spider named for Pennsylvania! These spiders can be really big, like palm-sized, when full grown. They may be confused for fishing spiders or wolf spiders if they’re not in their characteristic funnel web. They are rarely found indoors unlike T. domestica from the above story. Look for a, pointed abdomen with long spinnerets and two “racing stripes” (thanks, Jimbo!) on it’s carapace (head). 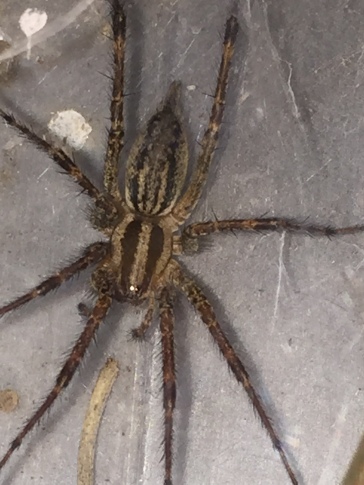 I’ve observed these spiders being quite aggressive with prey, biting and then dragging a full grown cricket, audibly tearing silk, back into the funnel. I’ve also seen them circle around prey apparently laying down more silk for better entanglement before attacking. Check out this video of me teasing a fairly large female Agelenopsis pennsylvanica. I gently brushed the underside of the web with lavender leaves I was carrying. The spider bit a leaf several times and then chewed through the web to get at the potential prey underneath! So wicked! After she realized there was nothing there, she retreated to her funnel to wait for the next vibratory signal.

At this time of the year (August), these spiders are adults and at their largest size. They’ve been around since spring, but you probably didn’t notice them because they were less conspicuous. Their webs are larger now, too, and the web is probably the first thing you notice until you see the giant spider sitting in the funnel. If you’re slow and not too obtrusive, the spider will allow you to get a good look it. Heavy breathing or a hovering shadow seem to send them darting into the safety of their retreat. Enjoy these guys when you do discover them. They’ve survived predation, starvation, and dehydration all spring and summer to be where they are now. Somewhere, hidden away, is an egg sac. Mom will hover around it until first frost and then she will die. The spiderlings in the egg sac will over winter. In spring, they’ll go mostly unnoticed in their little funnel webs. See if you can identify them!