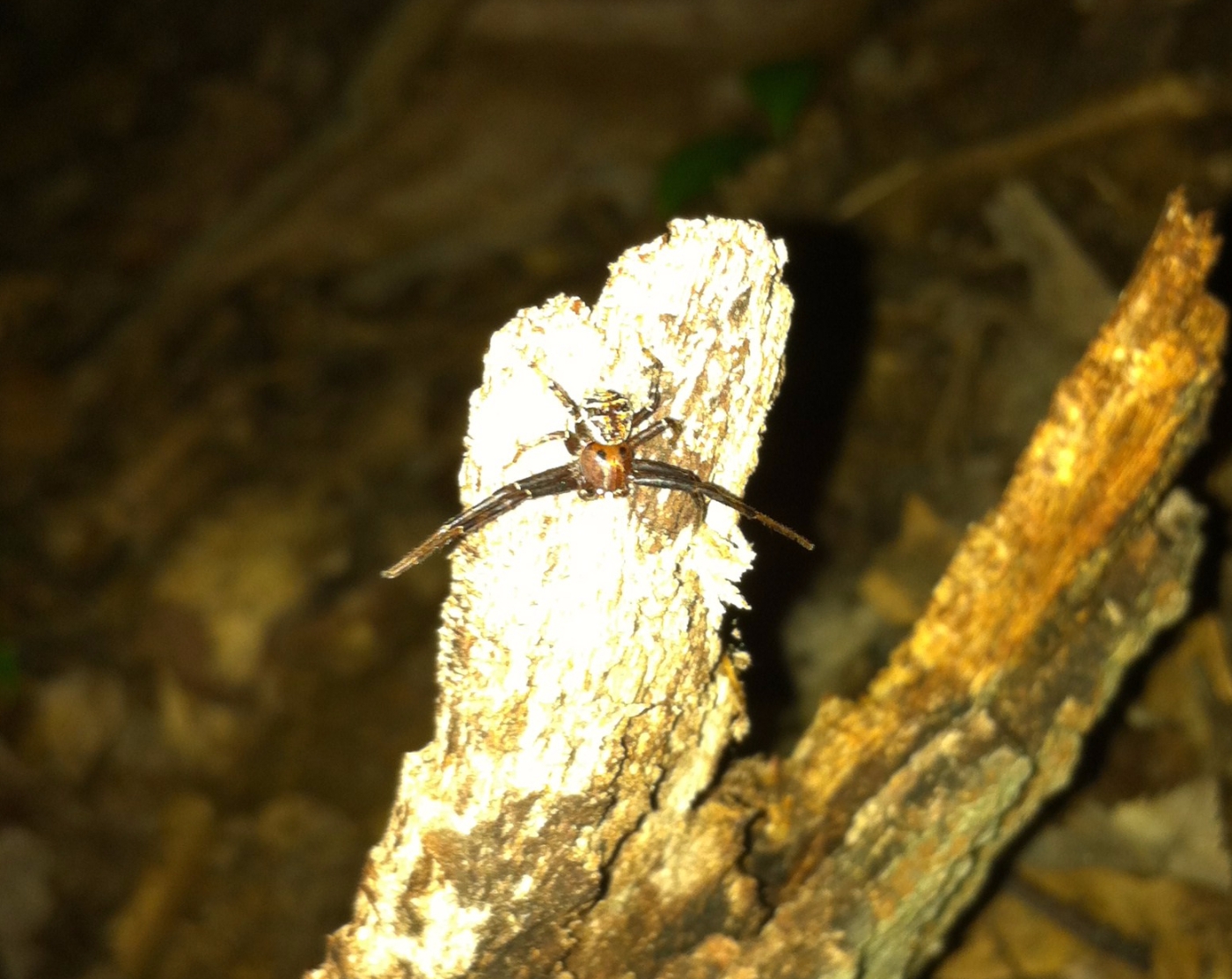 One of the most difficult questions I am asked is, “What’s your favorite spider?” I never have a consistent answer to this and usually go with what is holding my attention at the moment. In this moment, my favorite spider is hands-down, the crab spider. There are about 130 of them found in North America. The crab spider family’s official name is Thomisidae (pronounced to-MIS-i-dee) and they are most recognized for their crab-like appearance. Their front two pairs of legs are longer than their back legs and they are experts at ambush. Although there is some variation in the family, the shape of the abdomen reminds me of a corn kernel. Crab spiders sit and wait with their front legs stretched out like a trap. They do not build a capture web. They are smallish spiders, the largest spider in this family is about 11mm (which is about the size of a quarter including legs).

Some crab spiders prefer to sit on flowers and can even change color to match the flower after a few days. They are hard to see and have fast-acting venom so large flying insects can be seized quickly.

Other Thomisidae family members prefer the leaf litter and crevices. Their coloration and patterns are more drab than the brightly colored flower crew. Some of the former crab spiders can squeeze into very narrow spaces such as under bark or stones. Spider expert W.S. Bristowe (1901-1979) described this group of crab spiders as “toad-like” in appearance. They are more squat and “muscular” than the crabbies found among the flowers.

Finding a crab spider is difficult (especially the ground dwellers) unless they’re moving since they are so awesome at blending in. I remember seeing one in a gravel driveway as I was getting into my car. It was a small, stout, gray-mottled crabbie. It would scuttle (almost like a crab) and then duck behind a stone. They’re not very fast, so it was an easy capture. This was years ago, so I don’t have any pics of the gal, but she was amazingly cool to watch during feeding time. I tossed a cricket into her container and she would only move to face the cricket when the cricket moved so her movements were robotic and jerky. I was taking a chance with the success of this feeding because the cricket was larger than the spider. Spiders will often run away from larger quarry. Not this spider! When the cricket was just in front of her outstretched legs, the spider FULL ON TACKLED the cricket, even rolling a few times while the cricket fought to get free. Her venom did its job and the cricket was still fairly quickly. Ever since then, when I look at crab spiders, I see a comical, mini body builder flexing huge arms in a wrestling stance.

This past summer, I caught a completely white crab spider while camping in Sligo, PA. She was on my tent, which is orange, so she stood out like a light. I kept her in a plastic container where she assumed crab spider position (front legs outstretched) at the top, near the lid. I am unsure of the species and can only guess the genus as Misumena. Three days after I caught her, an egg sac appeared. She had been gravid which explained her previous robustness. Weeks went by and finally, the spiderlings started to emerge. I had the spider’s container in the kitchen (there’s usually one in every room for “spider TV”) and thought SURELY, those tiny, little, mama spider replicas would never fit though the air holes…

One morning while I was having coffee and doing my morning stare (AKA coming to terms with the fact that I’m actually awake) I noticed a teeny little crab spider (one of the babies) on the wall. White on white, I just happened to notice the outline. As my eyesight focused, I saw two more up the wall, and then two more on the ceiling. Twenty spiderlings later, I accepted my inaccurate assumption that the crab spiderlings would never fit through the air holes. I captured the escapees and then took the container outside to release the other twenty (or so) that were hadn’t figured out the air holes thing. I kept the ones I caught in hopes to rear them, but I had the vials too moist and lost all but two. They last two died by mid August, even after I had adjusted for humidity levels. I was bummed out and frustrated, but I like to think the ones I released, including the mom, had survived to make even more, beautiful, white crab spiders.

Around the same time I caught the white crab mom, I caught a small, brownish crab spider among some leaf litter in Frick Park. It was immature and molted twice between July and September. After the second molt, I noticed swollen palps indicating that it was a male. I affectionately started to call him “Thomas”. Thomas molted once more, probably the for last time (full grown adult!), and is much larger and leggier. I’m guessing he belongs to the Xysticus  genus, but I can’t be sure unless I pluck off one of his palps for the microscope, which I’m not going to do. I’ve grown quite fond of him! 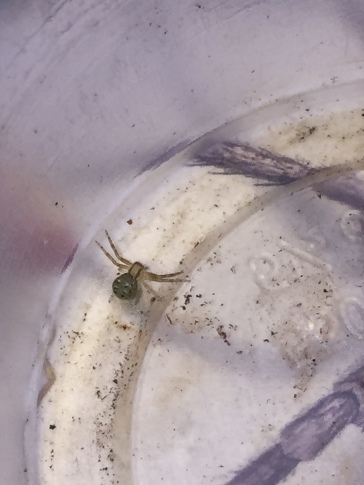 Although the photos above show Thomas at the bottom of his container, he mostly sits face down near the top at the lid. When I open the container for feeding he raises his front legs, very poised and alert. He’ll make a short, rapid step for every time I bump the container seemingly looking and reaching for where the commotion is coming from. If he gets overwhelmed, he drops to the bottom and freezes in the brown mulch. If there is no cover, he’ll run across a surface until he can slide under something. Sometimes, it takes me a second to locate him when he’s right under my nose.

Knowing from previous observations that crab spiders are seemingly fearless at tackling large prey, I tossed in a cricket that was twice his size to see what happened. He had previously been living on fruit flies. The cricket moved around the enclosure towards the spider, but then stopped at a water droplet to drink. The spider sensed the cricket and turned to face it, with his long front legs outstretched. The cricket didn’t notice the spider and continued to forage around in quirky cricket movements. Every time the cricket moved, the Thomas would move a little closer until he was hovering over the cricket like a tiny, outstretched hand. It reminded me of Nosferatu’s shadow! The cricket moved again and this time the Thomas lunged, grappled, and bit in. The cricket was stopped struggling within seconds and after a few more seconds, the spider relaxed and fed with it’s front legs splayed out – a position I’ve observed with other crab spiders. Another interesting observation is how crab spiders always seem to bite the insect between the head and thorax.

Thomas with his largest quarry to date

I have one final crab spider profile. This particular crab spider was caught using a sweep net in a rural area in central Florida (oak and pine woods). I never did find out the species. I even sent a photo to the American Arachnological Society’s facebook page for help with ID and they weren’t positive either. I’m going to go with the Mecaphesa genus as my best guess.

This spider was strikingly colored yellow and maroon. Besides her color, what stood out to me was her ability to stay completely still under any circumstance. If prodded, she would allow herself to go with the movement, even to the point of being flipped over. She never broke into a run to get away. She had a small body (~4mm) and extremely long front legs. I fed her fruit flies and sometimes, a fly would crawl right over her before she’d make a move to grab it. This spider molted once while I had her and lived for 5 months. She died while feeding! I have her preserved in an alcohol vial with the fly still in her “jaws” which seems fitting for her to be in an active-statue position for ever!. I was so interesting getting to know her!

I would like to thank Thomas, the crab spider, for tolerating multiple photo shoots and video clips. He only got away twice. And all of the other crabbies who passed under my camera or microscope so I could share my observations with you! Crab spiders (Thomisidae family) are super cool and easy to observe since they prefer to be still. Look for them as early as May. You might get to know a Thomas of your very own!