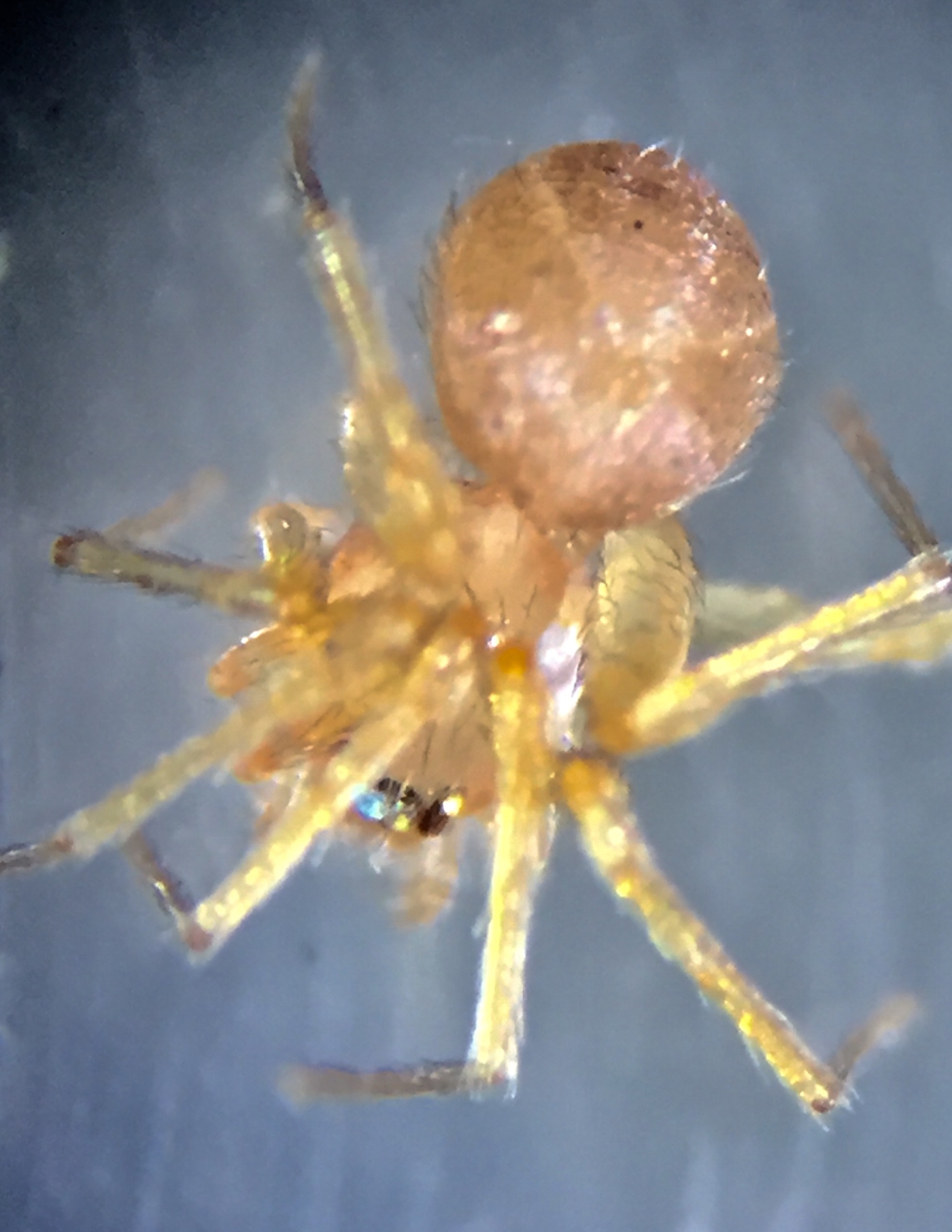 I was kneeling down on the floor sweeping cat-ejected kitty litter with a hand broom when I noticed a tiny, tan spider cruising along the floor. I’m talkin’ TINY, like the head of a pin with legs. I only saw it because it was moving. A few hours prior, I caught a freely roaming juvenile spitting spider (also tiny) in that very same room and thought it might be another one which, to me, would be a fantastic stroke of luck! I gathered the spider into a vial for inspection. It might be my lucky day for spitting spiders or it could be a young checkered cobweb spider – another harmless, yet PROLIFIC spider that is stubbornly common in the house, no matter how often I remove them.

When I sat down at my dissecting scope I was anticipating a spitting spider confirmation. That’s not what I had. When you get to know spiders, you know what to look for in a glance: spitting spiders = enormous heads, wolf spiders = large eyes, funnel web weavers = long spinnerets. THIS spider was pale, had zero markings, no spines, and six eyes. That sometimes = brown recluse, which aren’t endemic to Western PA. However, I have raised brown recluse spiderlings. They’ve all died except for two. Both are fully grown now. Aw man! Did two happen to get loose and establish a population? Was this a tiny recluse spiderling? I started to get anxious about the conversation (and spider education presentation) I would need to have with my landlady. Then logic kicked in. What are the odds that not one, but TWO recluses got loose, matured into a male AND female, avoided the cats and the checkered cobweb weavers stationed under the furniture, found each other, mated, and produced a viable batch of spiderlings that are now established in the house? The possibility was low, but it was still a possibility. I looked again at the spider. The eyes weren’t in the correct pattern or shape for a brown recluse and this spider’s eyes shimmered in the light (caused by the reflection of the tapetum, like in cats). Recluse eyes don’t shimmer. Plus, the way the legs were held and the general shape of the spider’s body all said definitely NOT a spiderling recluse.

So what was it? Luckily, since most spiders have eight eyes, having a six-eyed spider would make identification a heck of a lot easier. I skipped to the “six eyed spiders” section in my identification manual and found a matching eye pattern among the illustrations. Got it! This spider was in the Oonopidae family (pronounced owen-NO-pidd-ee), a mainly tropical family of tiny (1-3mm) spiders with the common name, Goblin spiders. Sweeeet. I had never met this kind of spider in person. Just the name alone was cool!

I get very motivated when I find a “new” spider that I’ve never met in person. I quickly shifted gears from worrying about my lease agreement to finding out as much as I could about Goblin spiders. I kept the spider for observation and began the research dive to identify it. There are about forty different kinds of Goblin spiders in North America according to the Spiders of North America: an identification manual. I used a little CO2 to put the spider “to sleep” and was able to flip it over and see the dark patch on the belly indicating that this tiny spider was a fully grown, mature female, so tiny doesn’t always mean spiderling!

With the spider temporarily immobolized, I was able to determine the genus in just two anatomical questions. Does the spider have scutes? Okay, what the heck are scutes? They’re hard, thick plates of exoskeleton found on the abdomens of some spiders, especially goblin spiders. No scutes on mine. Is the femur of the fourth leg fat? It sure was! Ladies and gentlemen, we have Orchestina! What’s cool about this particular genus of Goblin spider is that they hop!

With my dissecting scope at top magnification (40x) the spider parts I needed to see for a species ID were just too dang small, so I was unable to ID to species. The goblin spider was housed in a vial with a piece of toilet paper as a climbing surface, although the spider had no problem crawling up the sides. She seemed to prefer being up near the lid in a silk hammock which she would construct making back n’ forth motions while turning in a circle. As the weeks went by, I found two more females inside the house. I was getting better at noticing them at a glance. Tiny, pale, high abdomen, walking as though on a mission, shiny eyes = goblin spider, or at least Orchestina.

What in the microscopic world does a goblin spider eat? I tried a fruit fly and the fly was gigantic. The spider didn’t make a move towards it, even at close range. I plucked a pesky mealy bug from one of my poor houseplants and it was also ignored. In a paper by Korenko, Hamouzove, and Pekár (2017), they suggested springtails, termites, ants, and aphids as potential entrees. Their paper was very interesting as they experimented with these different types of arthropod prey to see if Goblin spiders of the Triaeris genus were springtail specialists. Although I could easily go out to the compost and collect springtails, I decided to try some booklice, an equally tiny insect common around homes. I often find them on my planter drain plates. Using a magnifying glass and a moistened Q-Tip, I gently lifted them off of the surface and tapped them into the spider’s vial. Nothing happened right away, but when I checked later, the goblin spider was eating one of the lice! After that, I actually did find a springtail hanging out with the booklice. The spider ate that, too, so there’s the food source for my indoor population of goblins!

During the goblin spider’s residence in the vial (which is actually a large enclosure considering her size) the spider’s habits have been quite uneventful, at least when I’m checking on it. It rests in its hammock at the top and sometimes at the bottom of the vial. I don’t seem to catch it wandering. Perhaps, it’s doing that in the very early hours of the morning when I’m fast asleep. Although I caught all three of these spiders in the daytime, I wonder if I had simply disturbed their resting place and the spiders were fleeing instead of being active day wanderers.

Another clue as to the true identity (species) of my goblin spider came weeks later when I was reviewing my journal notes. I had a specimen from October 2017 labeled “Hopper” that I never identified. My notes read, “I found a tiny, tan spider, only about 2mm in the house draglining off of the rim of my (Pittsburgh) Pirates cap while I was wearing it. I followed its drop to the floor and the spider started hopping, like a springtail! I almost lost it because it hopped so far! I stuck it under the scope for a quick glance and there was nothing odd about it – no bumps, humps, or horns. I noticed it had sparkly eyes, like they were moving in the light; highly reflective.” What does that sound like to you? In a moment of self-rejoicing, I saw that I had preserved the “Hopper” in alcohol labeled with a question mark. I excitedly pulled the specimen and popped it under the scope. It was definitely Orchestina and an adult male! I totally missed that fact that the spider had only six eyes when I first looked! I went back to the taxonomy papers and was able to make a confident ID using the male’s palps: Orchestina saltitans. I would assume that the females I caught were also Orchestina saltitans. And as a final confirmation, a paper by Izquierdo and Ramírez (2017) includes a species distribution map with O. saltitans being the only Orchestina species found in the northeastern US.

Knowing that there are mini sentries on duty for the tiny little house bugs that we can barely see is kind of comforting. I would say these goblins are definitely the benevolent kind. They are completely harmless and keep to themselves until I go sweeping and moving stuff around, not that I mind finding them! Check out this video to see a hopping goblin. The second part of the 40 second video shows one eating a springtail. You can see its eyes shining in the light just before it hops out of frame!

2 thoughts on “Meeting the Goblin Spider”