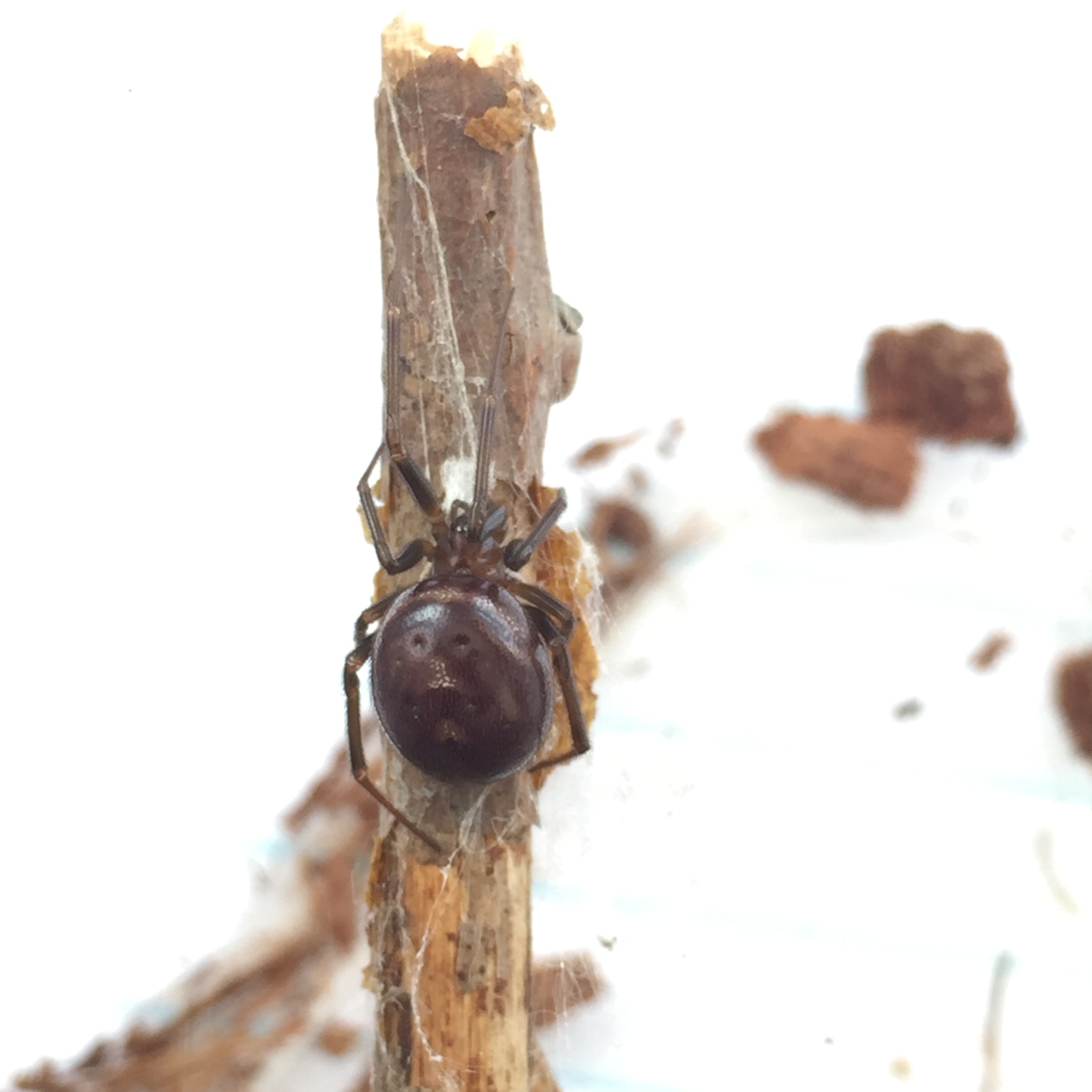 False WIDOW? Right away, people get nervous about the name. It’s the perfect cue for scary music and another reason to be afraid of spiders. But it’s not. The first thing everyone wants to know is, “Are they venomous?” All spiders, except for the family Uloboridae are venomous, so when an article boasts, “VENOMOUS SPIDERS ON THE RISE,” it’s like saying, “BEES WITH STINGERS ARE ON THE RISE!” My point is that spider fear is usually exploited in headlines to attract attention. In general, spiders are scapegoats for many ailments, even when they are completely innocent. A small group of spiders in the genus Steatoda are nicknamed “false widows” because of their resemblance to our true widows in the genus Latrodectus. In the UK, they refer to Steatoda nobilis as the noble false widow. This species is not found in Western PA, but has been introduced to California. Both the Steatoda and Latrodectus genera are in the same spider family Theridiidae (AKA comb-footed spiders) so they share some of the same physical characteristics. They both make scaffold-like cobwebs and draw silk from their spinnerets using tiny, comb-like spines on their back legs. They are about the same size as true widows, have big butts, tiny heads, and are dark colored. False widows do not have the red hour glass marking on their bellies, but they look enough like them to be nicknamed “false widows”.

Do we need to be concerned about false widows? The answer is no! A study was published in the Journal of Toxicology in 2003 about the effects of false widow bites. The study collected data over a period of thirty-nine months. Twenty-three false widow bites were verified (specimens were collected from the site and ID’d by an arachnological expert). The effects of envenomation were pain and swelling at the bite site. Six people out of the twenty-three experienced nausea, headache, and tiredness and were fine the next day. No one died and not one person’s skin started to slough off. In recent media based out of London there have been articles describing the false widow, Steatoda nobilis, as “UK’s deadliest spider”. Another article describes a mother’s warning after her “daughter suffers horror bite” adorned with photos of an open, oozing wound. Unfortunately, folks who know nothing about spiders are apt to believe this. The British Arachnological Society states on their website, “The media hype about ‘false widows’ (by which presumably Steatoda nobilis is meant) is beyond reason and irresponsible.” And it is.

Do we have false widows around here? Yes, we do. Steatoda grossa, “our” false widow, is common in Western PA, but you have to look for them. I personally haven’t found any around the house, but (I’m 90% sure) I’ve found them in the woods.

My discovery of false widows started out a few years ago when I was trying to identify a spider I never really noticed before. I was hiking the Emerald View Trail (West End of Pittsburgh) in May casually looking for spiders. I found a blackish-purple spider under the bark of a dead log. It was about 10mm, with no markings, a shiny head, and abdomen, and 4 distinct dimples on the dorsal surface of its rather oval abdomen. It didn’t resemble any photos in the field guide and although there is variation among individuals I still wasn’t sure. I hung on to her to observe and get to know her. Unfortunately, she died about a month later. Her container was too humid. I didn’t keep the specimen because she was in such bad shape and I never did confirm if she was actually a false widow.

My second encounter with what I think was a false widow was on the same trail, but in April the following spring. I lost the specimen as quickly as I caught it by accidentally using the same vial to catch an immature jumping spider. The unconfirmed false widow balled up and rolled out of the vial into the leaf litter and vanished. In the moment I realized what happened and moved my eyes, the jumping spider vanished, too. Much cursing ensued since I was eager to confirm if these were, in fact, Steatoda grossa. Not to mention I was frustrated about losing the jumping spider. Darn those escape tactics!

My third and most productive false widow encounter was in Virginia Beach (October of 2015) where they seem to be more common among houses. I was poking around my relative’s backyard and flipped over some plastic car ramps and hit the jackpot of false widows (Steatoda grossa)! I caught a male and female to bring home and this was the true start of my experience with them. While in captivity, I fed them crickets, sometimes twice as big as the spiders. This is where that venom comes in; to subdue prey sometimes much larger than themselves. Crickets will fight, kick, bite, and sometimes kill the spider. The venom is essential to their survival- first and foremost, to eat. Secondarily, as defense – and that’s if they can’t run away.

In March, the female false widow made an egg sac and then a second sac a few months later. Momma spider has long since died, and the many, many spiderlings have been released, but I did hold onto two sisters; one from each egg sac. They’re 3 months apart and coming up on their 3rd year in captivity this spring.

For awhile, the older sister was much larger. They’re the about the same size now- full grown, well fed, and protected. As far as spider personalities go, these gals are super laid back. At most, I’ll get a glimpse of them just after I turn on the light right before they scramble back into their cardboard toilet paper roll retreat. They’re not as voracious as they were when they were growing. When they were speck-sized spiderlings, I observed one wrapping a fruit fly that was twice its size! There are notes about how fast they’d move when I’d feed them and how cool they were to watch. I guess we’re in the Steatoda grossa golden years now and they don’t need the food to boost growth and reproduction.

False widows…should we be scared? Not at all. I think we should be as cautious as we would with anything that could cause a painful bite. I’ve been mindful when handling them, but never scared. Again, these spiders are NOT coming after you. False widows are shy, secretive spiders that have been given an undeserved, negative reputation. Let’s save the false for the sci-fi movie screen and use the truth to further our understanding of our eight-legged underdogs.

2 thoughts on “The “true” on false widows”