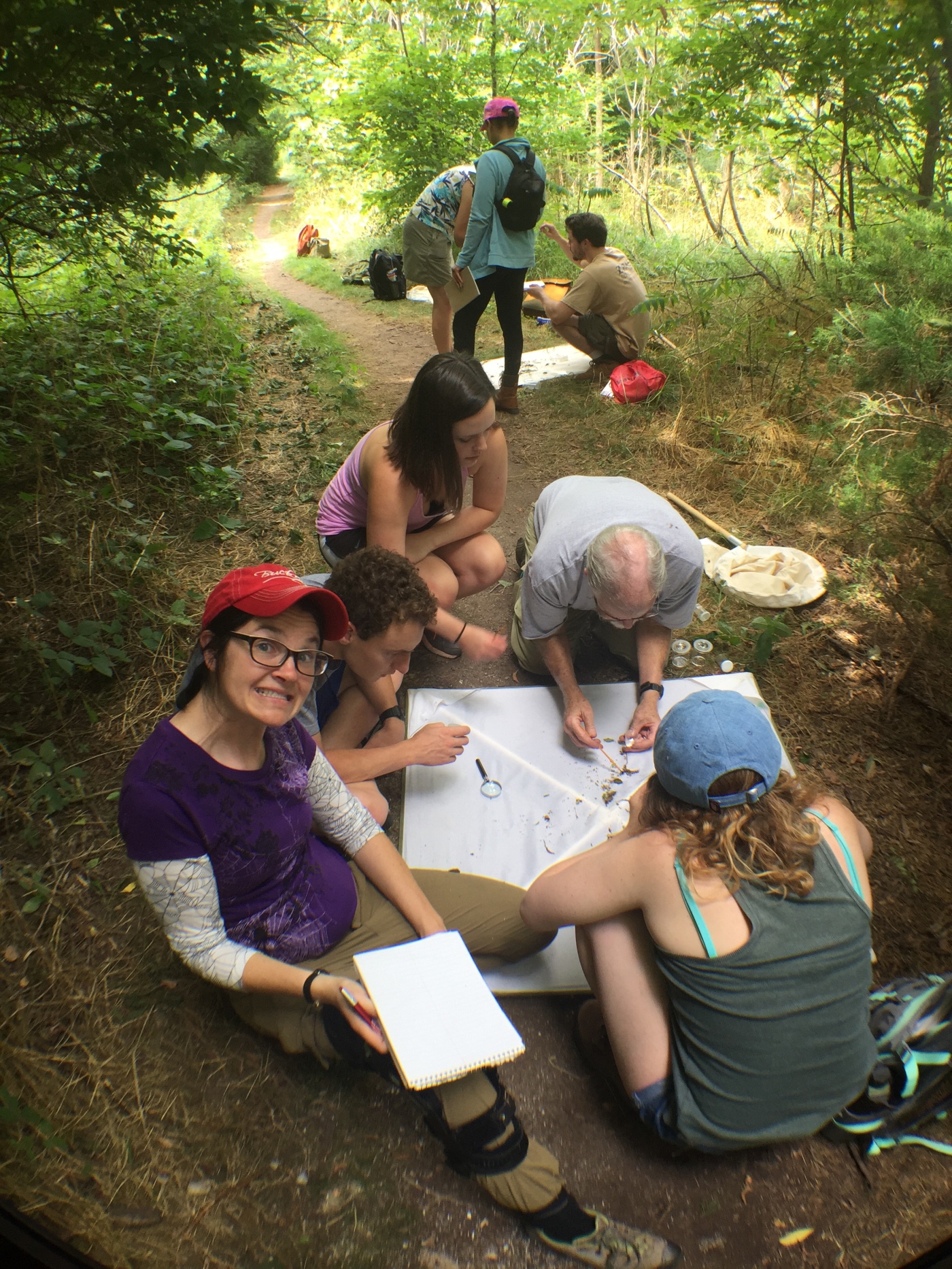 What the heck is “Spider Camp”??

It popped up this past spring (2018) on the American Arachnological Society facebook page: “Spider Biology summer course at Stone Lab (Ohio State University) – can be taken as a workshop”. I applied immediately. This endeavor instantly became my summer highlight. I could not wait! I have never taken a course on spiders and I was thrilled to hear that one existed, was only one state away, and open to everyone, not just students.  I’ve been self-taught with the help of books and many, many years of spider watching so the opportunity to get deep into spider biology with like-minded people was beyond bonus. There is no “spider community” or collective research happening in Pittsburgh that I know of. I have reached out to the few people who study spiders as a hobby and we share resources, but that’s about it. A Spider Biology class?? WOW! I could talk scientific names with people (and see how badly I’ve been mispronouncing them) and learn if they, too, have trouble locating the dang colulus! It would be the ultimate test to see if I knew my stuff! To make it even MORE exciting, the course instructor was none other than Dr. Richard Bradley, President of the American Arachnological Society, and the author of my well-used, earmarked, written all over spider ID book I’ve toted around and promoted since it was published in 2013. To me, Dr. Bradley was a rock star and I anticipated how to appropriately ask him to ‘please sign my book’ without seeming like a complete geek fan girl.

Now, all I had to do was wait 3 months until it started. I sewed extra pockets into my field bag so I could be organized (my field bag is basically a sac of tools and containers that I have to dig through) and made up my packing list for 7 days on an island. There was a possibility that the class may not run. It hadn’t the previous year because not enough people signed up, so there was a good bit of nail-biting suspense. Obviously, the course ran (everyone in my social circle was getting minute by minute updates) and on July 29, I was packed and on my way to the Stone Lab on Gibraltar Island for an intense, seven day course ALL ABOUT SPIDERS!!

A four hour drive and two ferries later, I arrived on the island for orientation, dorm assignment, and class intro. There were multiple summer courses happening and the island was buzzing with energy. I met the eight other students in the spiders class. There were two graduate students, three undergrads, a high school teacher, a naturalist, and me. I was NOT the only spider geek! Everyone, whether they were really into spiders, or just gathering credits, was super cool and engaged. Lab discussions were collaborative and fun, sometimes until 11 at night!

The very first thing we did as a class was go on a nocturnal spider hunt. There were spiders everywhere; on top of each other, dangling from trees, fighting over web area – it was pretty cool. What stood out right away was that so many spiders were the same kind. One of them was a species of long-jawed orb weavers, which is always a really cool find near streams and ponds around Western PA. I love how they try to camouflage themselves by lengthening their bodies to fit along skinny twigs. They have long, abdomens and conspicuous jaws that are more for mating purposes than for hunting. They’re orb web spinners and the webs are usually on a horizontal plane.

The second most common spider was Larinioides cornutus AKA the furrowed orb weaver. If you follow the hyperlink and read that blog, you’ll know that I’ve become quite enamored with this species. It’s funny because after a week on Gibraltar Island, these were the spiders I was least excited to find…because they were EVERYWHERE! My research project ended up being about why some L. cornutus spiders were building horizontal webs when they’re normally vertical. My findings led me to deduce that they’d build webs wherever they could find space! If it was among the ground cover (with no vertical plants to use for frame threads) they’d just go with a flat web. I’m tellin’ ya – between Larinioides and the long jaws, it was tight for space!

If you’re reading this and thinking, “I would be fr-eaking out”, know that all of the spiders we found were harmless. And kudos to you for reading onward! What was way worse, as far as multi-legged critters on the island, were the chiggers. Now, chiggers are something to be uncomfortable about. They’re the larval stage of a particular mite that purposely seek out people to bite and then feed on skin cell fluids. And they getcha along sock and underwear lines. They’re so tiny, you can’t even see them. Just sitting on the grass can be all it takes. Next thing you know, you’re itching and scratching little, red, bug bite bumps in areas that aren’t publicly acceptable to be scratchin’. Spiders don’t do that. Spiders are cool. Spiders don’t seek out humans to bite. They want nothing to do with us. Just remember that…

The week was intense. There was daily lecture, a field collecting trip, a Spider ID quiz, cladistics and anatomy homework, properly labeled specimens due, the research project, and a final…all in seven days. There was a lot I knew and a lot I learned. Watching Dr. Bradley’s techniques were eye opening. Dr. Bradley (he preferred “Rich”) was very down to earth. He didn’t wear a cape, as I imagined. He was super experienced and passionate about teaching about spiders! Rich could ID spiders at a glance and I would stand by with pen and paper taking as many notes as I could to capture how he saw things, both obvious and subtle, such as the height of a web or the posture of a particular spider.

He had several tricks of the trade, one of which was an electric toothbrush with a thin wire attached to the end instead of the brush. He would hold “the buzzer” up to a web and coax out the spider via the vibrations! Another favorite trick was how he used a CO2 cartridge dispenser (for dusting electronics) as a spider “gasser”. If you spray CO2 into a closed container holding a spider, the spider will “fall asleep” or become incapacitated long enough to get it under a scope to see “hard to reach” diagnostic characteristics. After a few minutes, the spider comes to and seems to be fine. This was revolutionary to me because I enjoy observing spider behaviors and always feel a pang of guilt when I have to put them in a killing jar for proper ID.

We caught spiders I’ve never seen outside of books and I got more acquainted with spiders I already knew. Some of my favorite specimens are pictured below. Not pictured is the tubeweb spider, Ariadna bicolor, a common, yet, reclusive spider who makes its small tube of a web in cracks and crevices. There were a whole bunch of these guys along the creases of the concrete Cooke Castle statue. When we tickled the edges of the tube openings with blades of grass or Rich’s buzzer, the spiders would suddenly appear and disappear. If the vibrations were prey, the spider would’ve snatched the bug lightning quick! It was like playing with a jack-in-the box except a single spider would only fall for the bluff a few times before it wouldn’t come out anymore.

“Spider Camp” was really awesome! I made friends with spider people (and converted spider people) who live in other states and I feel more connected with a network. I’ve created new spider goals for myself (like attend the next American Arachnological Society meeting!) and look forward to incorporating everything I learned into my own workshops and presentations. I have a renewed inspiration!

Since I took the class as a workshop, I received a participation certificate from the Stone Lab which hangs proudly above my laboratory desk. I did eventually ask Rich for his autograph and a photo. It wasn’t so bad. He was gracious about it. I had such a great experience. And now…I’m official!