You have probably seen them – nearly horizontal orb webs with one, two, maybe THREE green spiders in them. This is Leucauge venusta, AKA the Orchard Spider. If you see more than one spider in the web, one is the female and any others are most likely males waiting to mate with the lady. One summer, while hanging out with friends on the porch, I noticed one of those nearly horizontal orb webs and walked over to get a closer look. The web wasn’t that far from where we were sitting. What caught my eye was that the shape of the spider looked odd. Upon closer inspection, I realized there were two spiders, a male and female, mating at that very moment. “Guys!”, I shouted excitedly, interrupting conversation, “Did you even see what’s going on over here? They’re mating!” My friends were kind enough to humor me and take look. I know not everyone thinks mating spiders is a ‘drop everything’ engagement. Thank you, friends, for being so supportive, patient, and brave!

I first started noticing Orchard spiders in mid summer when they are full grown. Most orb weavers are nocturnal, but orchard spiders are active during the day and are fairly conspicuous with their large, dinner plate-sized webs and long, greenish legs. If you get up close, you’ll notice their oval, gem-like abdomens. Venusta means charming, attractive, beautiful in Latin. They are quite beautiful! Since the web is almost always at a slant and the spider sits on the underside of the web you can get a good view of the orange blaze on the dorsal surface of its abdomen. 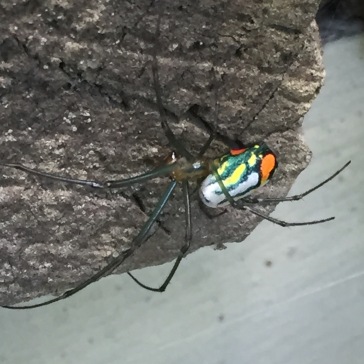 You can find orchard spiders in early spring as tiny spiderlings in small orb webs (~4″ diameter) around the yard and in the woods. It took me a while to figure out what those tiny orb weavers were. They don’t stand out as being predominantly green when they’re that small. I DID notice, however, the spiderlings have a bright orange blaze on the underside of their abdomens. I don’t know any other spider around here that has that orange blaze so I assume that’s what they are! I’ve tried to raise orchard spiderlings in captivity to confirm this assumption, but they don’t survive. They may have specific habitat requirements that I’m simply not meeting; humidity levels, airflow, etc.

Some background on these spiders is that they are in the Long-jawed orb weaver family, Tetragnathidae. Spiders in this family have a tendency to create slanted to completely horizontal orb webs. In the genus Leucage there are only 2 species native to North America, L. venusta and L. argyra. The two species are nearly identical, but L. argyra is only found in Florida. The orchard weaver is a harmless spider despite its bright coloration. When disturbed, they usually flee their web or drop to the ground. Enjoy these gems while they last. It’s late August right now and I haven’t noticed any. It was only a few weeks ago that I would greet an orchard weaver on my way out the door in the mornings. She had built a rather large web among the flowers in the sunshine. My guess is orchard spiders lay eggs in mid-late summer and then die off. The eggs  overwinter in the egg sac and hatch in early spring. Look for tiny orb weavers with an orange blaze! Even small, they are venusta.