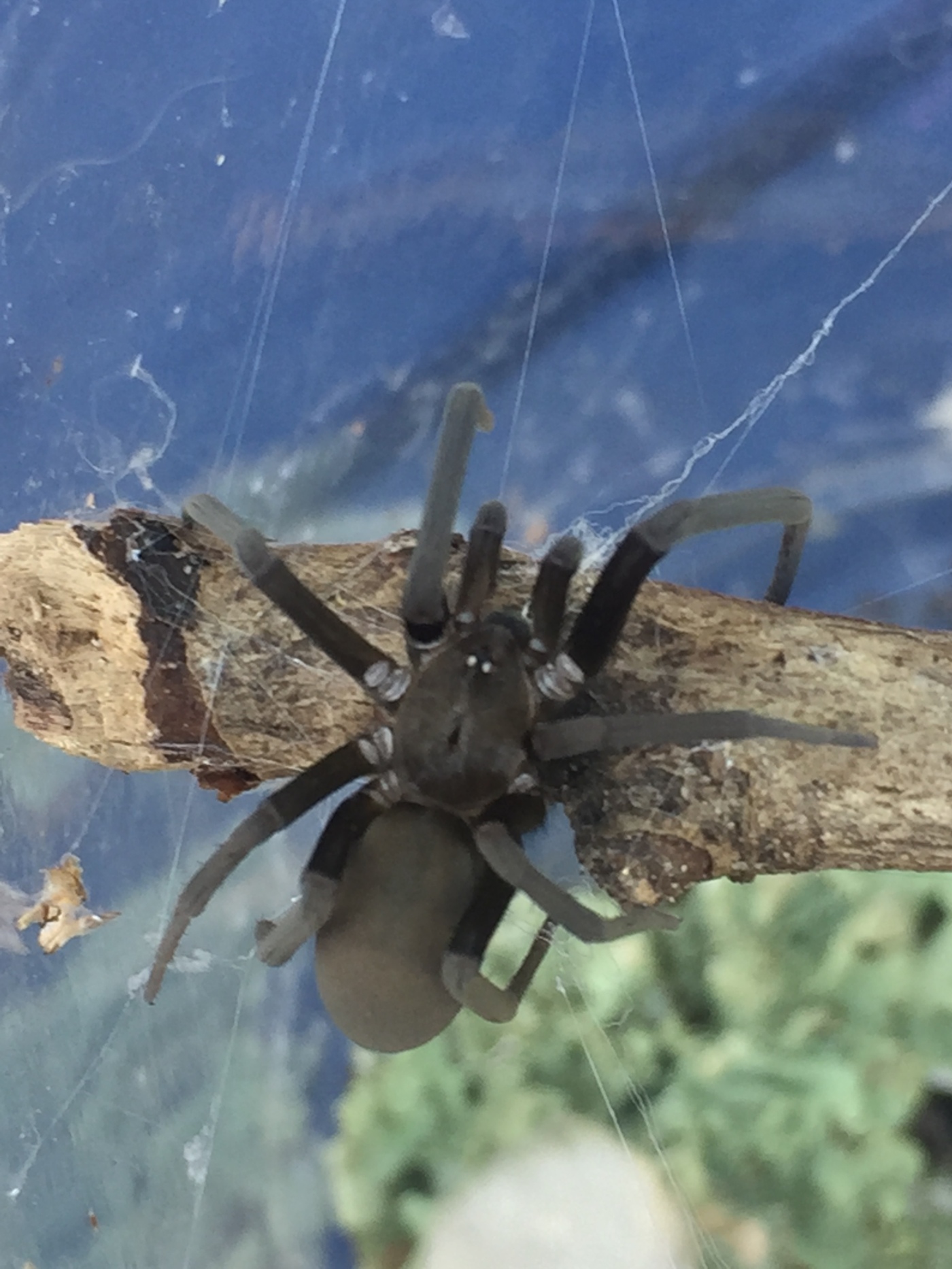 I love Pittsburgh, but I’d love it even more if there was a northern version of this spider! Large, gentle, and a velvety chocolate brown (can range to black), this spider reminds me of a mini tarantula. The scientific name is even great – Kukulcania hibernalis. I know it looks crazy to say, but this is important because common names can cause confusion. Many spiders can be and are called house spiders (pronounced hahse if you’re local). Some of Pittsburgh’s common “hahse” spiders include the long-legged Pholcus phalangioides, the fat-bottomed Parasteatoda tepidariorum, and its smaller cousin Steatoda triangulosa. All are pretty amazing in their own ways, but they’re nothing like their Southern kin. Not all house spiders are the same!

I first met the Southern House spider in Cherry Grove, South Carolina on a humid July evening in 2019. The fam was on vacation staying at an Air BnB a few blocks from the coast. My sister, knowing that our vacations consist of spider hunting and and pop up spider education sessions for the whole entire family, came running to get me. “Hurry, Amy! There’s a huge spider on the side of the house!”

It was love at first sight even though I had no idea what kind of spider she was. What I noticed right away was that she was the thickest spider I’d seen on vacation so far, she had really long palps (the smaller “arms” near the mouth), and light-colored cuticle at the joints nearest to her head. The eyes that I could see were clustered on a mound and not spread out or very large which might indicate a type of wolf spider. I gently collected her and she quickly became the shiny apple of my spider menagerie that week.

With the help of Bradley’s field guide, I was able to ID her without a doubt because of those few characteristics. Kukulcania hibernalis belongs to the Filistatidae family of spiders. There are only seven species of this family found north of Mexico. These spiders are more common in the south and southwest so no one living in Southwestern PA has probably ever had the pleasure of encountering one. They are cribellate spiders which means they spin woolly silk that isn’t sticky, but is highly “frizzed” making it hard for prey to get untangled. I’ve heard it referred to as “mechanical stickiness”. Cribellate silk is also very white and doesn’t look invisible like some silk does.

Southern House spiders usually stay hidden in crevices with a welcome mat of tangled silk radiating from the entrance. I’m not sure why the spider was out and about when I caught her, but I’m glad she was! The lifestyles of spiders are so diverse! On one hand, you have the jumping spiders who are out in full costume posturing in the sunshine, and then you have the reclusive, nocturnal spiders who are happy in a crevice and rarely wander out. That is the only negative of having a Southern House spider as a pet. The only time I get to see her is when she’s grappling a tangled cricket or when I’m changing out her enclosure. I was happy to hang out with her while I was doing just that this past weekend. It had been awhile and I had forgotten how beautiful she was. She inspired me to write!

Her temperament is calm and she is completely harmless. I’ve read that these spiders are often confused with recluse spiders probably because they are brown and reclusive, but they are distantly related. Since I also have a pet brown recluse (raised in captivity) I figured I’d do some quick comparisons:

It has been over three years since I’ve become acquainted with Kukulcania hibernalis. They seem to live longer than most other common spiders and are super easy to keep as pets. They’re also very easy to handle and are great for educational presentations because of their gentle demeanor and large size. I have to mention that the males of this species have SUPER long palps – it looks like they have 10 legs! I haven’t had the pleasure of meeting a southern gentleman house spider in person yet!

It’s been an awkward year and I am grateful that this story motivated me to share. The times of quiet introversion, however long it takes, eventually culminate into an irresistible urge to crawl out of the crevice!