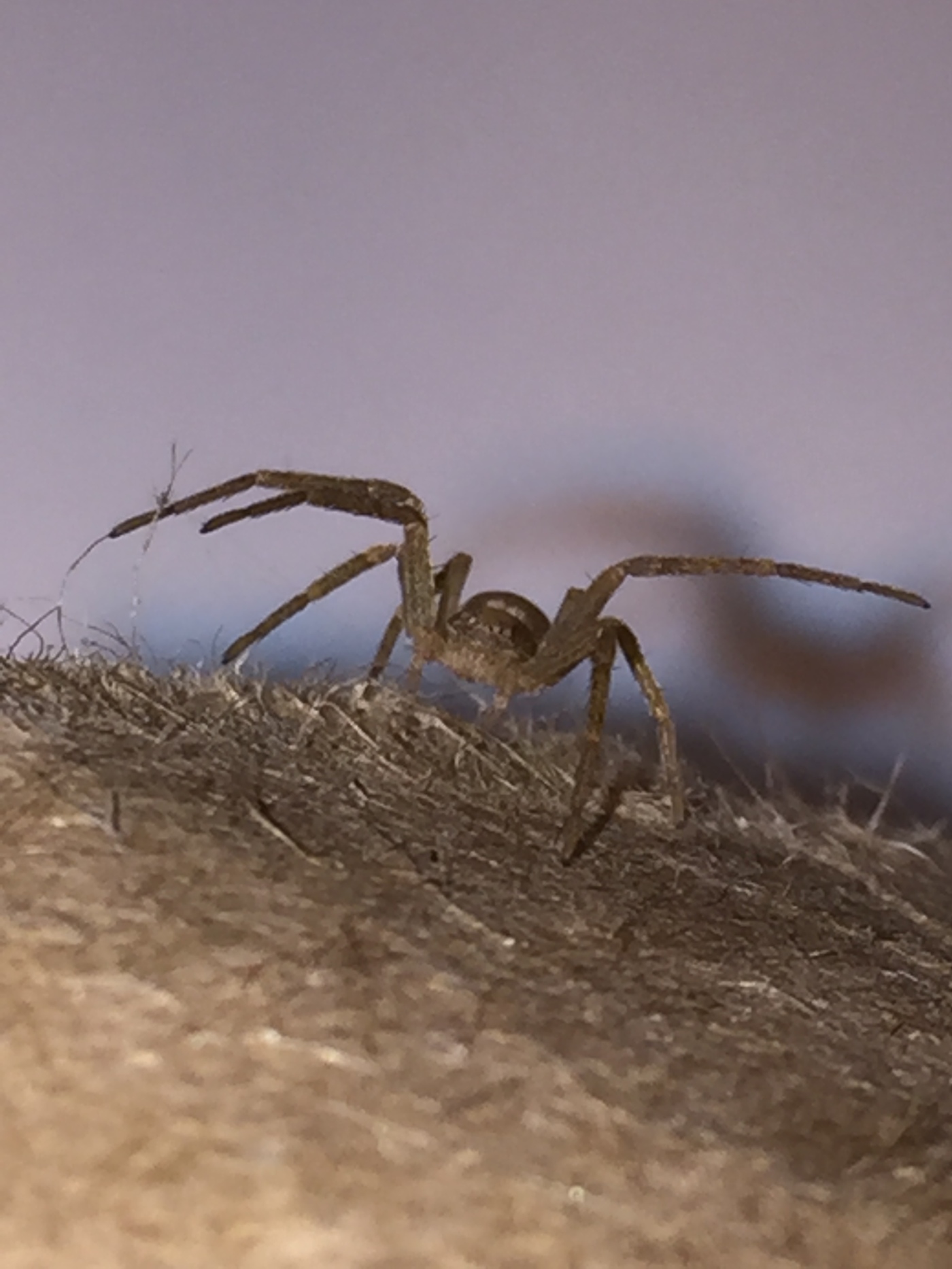 It’s hard to find spiders in winter around here. During winter hikes, I casually search by peeking beneath loose bark and flipping over an occasional rock or log (and putting it back in place after). Sometimes, I get lucky. Most of the time I find nothing. The types of spiders I most often DO find outside during the winter months are sheet web weavers in the Linyphiidae family (line-ee-FEE-id-ee) and spiders in the Philodromidae family, commonly called “running crab spiders”. On a recent hike, I collected two Philodromids under a piece of shale and (wouldn’t you know it) a linyphiid under the same piece of shale. Winter is a great time to study the spiders I keep. I do have a lot right now; spiders that were caught in autumn or spiders I’ve been raising. I thought it’d be cool to focus on the running crab spiders since they are the most recent addition to my arachnid assemblage.

What are running crab spiders? Well, they’re NOT crab spiders at all. Up until 1975, they were included in the crab spider family, Thomisidae. Then Heinrich Homann published a paper showing their many anatomical differences. The Philodomids were different enough to earn their own family status. According to the Spiders of North America ID manual (2nd, Ed.) there are 90 different kinds of Philodromids falling into six genera (Bugguide.net lists seven). Some are western, but most are widespread which means they’re pretty common. You’ve probably seen them before and just thought, “a spider is a spider”, but they’re too darn cool to overlook.

Spiders in the Philodromidae family can be as large as 8mm (measuring from head to butt, excluding legs). If you include the legs, the larger members of this family can easily overlap the circumference of a quarter. The abdomens of some of them remind me of the shape of a sunflower seed.

Within this family, there are six North American genera (out of thirty-one worldwide). To tell them apart, you need to use a dissecting scope to get a close up of their eyes. There are eight of them arranged in two rows. If the posterior middle eyes are closer to the posterior lateral eyes than they are to each other, then you can start to hone in on what genus you have. After that, it gets more difficult to identify species; remember there are 90. I’ve tried and need a coach at that level. My field journal notes are more of a diary of frustrated emotional ranting than actual information, BUT, if we can get to genus it narrows things down and that’s really good!

Moving forward with the above eye formula, if the second pair of legs are WAY longer than the others, you have the genus Ebo (or Titanebo for western US). If any of my Pittsburgh friends out there ever finds an Ebo, call me! I’ve never met one in person! The illustrations of Ebo in the field guides looks like a spider holding a sickle a la the grim reaper.

If we go back to the eyes and say they aren’t spaced like above, we only have three genera to narrow it down to and one of them (Apollophanes) isn’t found in the eastern half of the US. If the spider has a long skinny abdomen, it’s Tibellus. If it does not, it’s Thanatus.

One of the cool things about running crab spiders is their sitting posture. It reminds me of a star the way some species flatten themselves and fan their legs out. A flattened position is easy because their legs have a laterigrade orientation which means their legs bend toward their rear instead of forward allowing them to slide into cracks without angling their legs over their heads. Sometimes, if up against something, they’ll stick their legs out perpendicular to their bodies, which is pretty awesome. In the case of the Tibellus, they point their legs along a stem rendering them virtually invisible.

When you see a Phildromid move, you’ll understand how they got their “running crab spider” nickname. They are fast and erratic, but only sprint for a short distance before they stop. It’s so funny when I find them on smooth surfaces like a railing where there’s nowhere to hide because they’ll run in circles waving their longer second legs in the air and then they’ll flatten themselves “hiding” in plain sight. They can run along vertical surfaces without slipping and are very good at disappearing if the background is mottled. The running crab spiders around here are mostly found among plants and trees. They overwinter as subadults and mature in spring to mate. I guess squeezing into shale fissures is an acceptable place to be to get through the colder months.

Dondale, C.D. and J.H. Redner. 1978b. The Crab Spiders of Canada and Alaska (Araneae: Philodromidae and Thomisidae). The Insects and Arachnids of Canada. Part 5. Agriculture Canada, Ottawa Publication 1663. 255 pages.

One thought on “A Rundown on Running Crab Spiders”